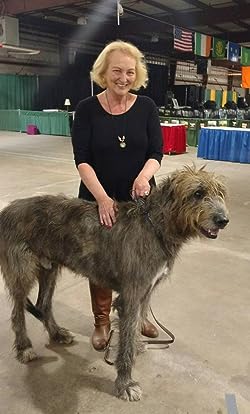 Ms. Powell lives outside Baltimore, Maryland with her husband, Russell, and Goldendoodle, Winston. Her love of Ireland and the magnificent Irish Wolfhounds inspired her ‘A Ballysea Mystery’ series. She is also the author of ‘The Bodyguard’, a tale of duty. betrayal, revenge and love during the time known as ‘The Troubles’ in Northern Ireland. As well as writing novels, she is a talented Technical Author with over 20 years experience. 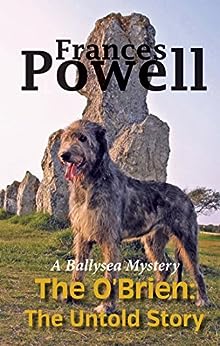 About HEIR TO A PROPHECY:

Shakespeare’s Witches tell Banquo, “Thou Shalt ‘Get Kings Though Thou Be None”. Although Banquo is murdered, his son Fleance gets away. What happened to Fleance? What Kings? As Shakespeare’s audience apparently knew, Banquo was the ancestor of the royal Stewart line. But the road to kingship had a most inauspicious beginning, and we follow Fleance into exile and death, bestowing the Witches’ prophecy on his illegitimate son Walter. Born in Wales and raised in disgrace, Walter’s efforts to understand Banquo’s murder and honor his lineage take him on a long and treacherous journey through England and France before facing his destiny in Scotland.

Hi there!  My name is Hannah Keyes, and I am an author, artist, and photographer.  I enjoy writing and illustrating children’s books, as well as writing novels and short stories for people of all ages.  Additionally, I have been a photographer for 10 years.  My roots are in black and white film photography and darkroom work, but I have since expanded into digital as well.

In both my writing and art/photography, the beauty of the natural world has always inspired me.  Perhaps J.R.R. Tolkien sums this up better in his words: “If you really want to know what Middle-Earth is based on, it’s my wonder and delight in the earth as it is, particularly the natural earth.”  Thus is much of my photography of wildlife and nature.  But again, in the words of Tolkien, “there is a part of man which is not ‘Nature,’” and is thereby, “wholly unsatisfied by it.” The beauty and grandeur of churches and holy sites is too a source of inspiration.  Though seemingly quite different, these two subjects share many similarities.  The beauty of creation reflects and points to the glory of God, and through churches and holy sites man seeks to give glory to God.  Together, these two subject areas make up the main focus of my photography.

J.P. Sexton grew up in the extreme North of Ireland, on a peninsula jutting out into the Atlantic Ocean.
The area is so far “off the map,” that very few tourists have made it up that far – hardly surprising when one considers that most Irish people have not ventured that far North either.

Like other Irishmen before him, J.P. learned how to be resourceful and to face challenges head-on. This inherent survival mode and adaptability has stood him well over the decades and the thousands of miles he has journeyed through life’s odyssey.

No matter how many continents he has crossed, or how long he has been away, he can always hear the call of his ancestors whispering to him on the wind when it is time for him to return home. The peace of mind and soul which he finds in his native Donegal, is like no other place on earth.

America’s premier hammered dulcimer player and recording artist, Maggie Sansone pioneering artistry has brought the ringing beauty of her music to hundreds of thousands of music lovers around the world. She has thirteen solo recordings including her new recording Wind Drift that was featured on NPR’s A Thistle & Shamrock where host Fiona Ritchie said “ Maggie Sansone sets us off on a journey… and with hands across the water, reveals a great variety of authentic acoustic delights.” The Washington Post has said of Maggie’s work: “Few recordings span the gap of generations so gracefully… she’s managed to balance art and accessibility, past and present, with unusual care and deftness.” Sansone has been the focus of much praise by the press as the most exciting and innovative hammered dulcimer player recording today. Her awards include INDIE awards from the Association of Independent Record Distributors, and dozens of nominations and WAMMIE awards from the Washington Area Music Association including Irish/Celtic instrumentalist and record label. She was the recipient of the prestigious ANNIE Award for Performing Arts in Maryland. Sansone produces Celtic and holiday concerts and has performed in a variety of venues, from the big stage of America’s Kennedy Center to Celtic and Renaissance festivals and street fairs with her puppet show Rover-dance. Sansone was featured on CBS-TV Sunday Morning, Maryland Public Television; NPR’s All Things Considered, Performance Today, the Thistle & Shamrock and XM Radio. As teacher and author she has created a series of music books for Mel Bay Publications that feature transcriptions of her music and playing style and was included in their Hammered dulcimer Anthology Series featuring America’s finest performers and teachers. She is founder and CEO of the independent record company, Maggie’s Music, Inc. with twelve recording artists and over fifty five albums in world-wide distribution. Three of these albums- Mist and Stone, Sounds of the Season, and Ancient Noels- have won Indie awards from the Association of Independent Record Distributors and eight time WAMMIE winner for Record Label of the Year. Unique partnerships include Sony/BMG’s DVD Scottish Christmas with Bonnie Rideout; Time-Life’s Celtic Tapestry, (2-CD set from the Maggie’s Music catalog). Maggie’s own recordings are: Wind Drift, A Celtic Fair, Mystic Dance, Celtic Meditations, A Traveler’s Dream, Dance Upon the Shore, Mist & Stone, Traditions; Ancient Noels (with Ensemble Galilei), Sounds of the Season, Sounds of the Season II, A Scottish Christmas (with Bonnie Rideout and Al Petteway) and Merrily Greet the Time (with Sue Richards).

“How does Maggie Sansone deliver on her latest album’s promise of “Celtic grooves, mystic moods”? Swiftly, elegantly, soulfully! Sansone sets into motion nimbly woven instrumentals – some ancient, some original, each charming in its own way.” The Washington Post

[Wind- Drift] Sansone once again shows she plays and composes some of the most engaging acoustic Irish/Celtic and world fusion music being released today.” New Age Retailer

“Steeped in tradition yet often wed to the contemporary…with unexpected color, rhythmic vitality and a venturesome spirit.” The Washington Post

“The most exciting and innovative hammered dulcimer player recording today…She has a fire and passion to her playing!” Dirty Linen Folk & World Music Magazi